On June 10, 2017 the founder of our company, Ken McKinnon, died at the age of 92.  Out of respect for the company he built and the many lives he touched we thought we would share the eulogy that was given at the funeral by his sons Wayne and Grant McKinnon. 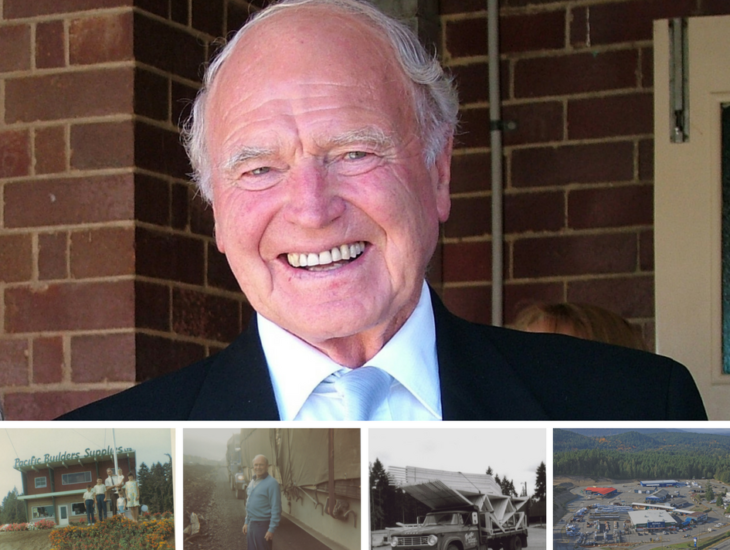 Thank you all for coming this afternoon.  We are here to celebrate the life of Ken McKinnon and this truly is a celebration of a long and admirable life.

Dad was born to Norman and Mary-Jane McKinnon on May 12, 1925 in the New Westminster Hospital.  Just to give the younger people some perspective, in the summer of 1928 – 3 years after Ken’s birth – sliced bread was sold for the first time ever; people were reported as saying “This is the greatest thing since Ken McKinnon!”

Dad was the second youngest of 13 children and grew up on a farm in the Surrey Centre area outside of Vancouver.  Aunt Eileen who is here today is the last McKinnon of that generation.

He signed up with the Royal Canadian Air Force the day after he turned 17 and a half in 1942.  The Air Force, short of aircrews, allowed enlistment at the age of 17 ½, provided you had your parent’s permission.  Ken trained in Alberta, Saskatchewan and Manitoba, and received his officer commission before being sent to England to serve as a tail gunner on a Lancaster bomber.  His flight crew consisted of men from Canada, England and Australia.  They flew many missions over Germany and had several close calls and harrowing experiences.  By the time the war ended in Europe, their crew had survived longer than any of the other crews they had started with 6 month earlier.  After Victory day in Europe in May of 1945, Dad was discharged and returned to Canada in September of 1945.

At this point in his life, Ken – whether by choice or by accident – ended up trying a little bit of everything career-wise.  He started a farming partnership with his brother Allen which they did from 1945 until 1949. Both brothers then moved on to logging in the Mission area from 1949 until 1953.  Dad abandoned logging and entered the Port Alberni’s dairy industry with his brothers Don and Les between the years of 1953 and 1956. This was not to be the end of Dad’s impressive resume as he went on to become a car salesman in Duncan and later worked on expanding the Crofton Pulp mill.

In the middle of all this relocating and switching professions, Dad met an Albertan by the name of Marie in 1949, and quickly married her in the fall of the same year.  They started a family and ended up with daughters Phyllis, Ann and Barb and sons David, Wayne and Grant.  He also had 18 grandchildren and 5 great-grandchildren (with 1 more on the way).

In 1959, Ken and 5 other men founded Pacific Builders’ Supplies in Cobble Hill. The company started off slowly; some days would go by without a single customer. But it grew steadily. Ken – at this point the sole owner of the business – caught his big break in 1969 when he started to produce roof trusses. Over the next few years, the operation expanded to include locations in Surrey, Langley, and Cranbrook.

Ken sat on many boards in the industry including the Lumber Standards Committee, the Canadian Wood Council and was instrumental in forming the first truss association in Western Canada.  To this day he is highly respected within the industry and the name Pacific Truss is synonymous with a quality product.   He was a pioneer in the truss industry and it was his true love in business.

By 1990, Dad started backing out of the business, and by 1994, the three sons succeeded in pushing him out altogether. His once single person outfit has grown many times over, at one point employing over 500 people.

In 2012, The Cowichan Chamber of Commerce presented Ken with a Lifetime Achievement Award. This achievement was in recognition of Ken’s community building mentality because, in his own words, “the best thing you can do for your community is to provide interesting, well-paying jobs for the people that live there.”  Over the years he literally employed thousands of people in BC in companies that he started.

You know when you have lived 92 years you have had a number of significant celebrations and birthdays.  Wayne and I have heard and given many speeches such as 90th birthday, 80th birthday, Chamber of Commerce dinner – for this speech we were able to cut some here and paste in some there.  You people are fortunate in that you are really getting the “Best of Ken McKinnon” speeches.

Retirement did not mean the end of Dad’s activity:

While gardening can take up a significant portion of your day, it was not enough for Dad, so he turned his green-thumb elsewhere. In 1996, Ken started volunteering at Providence Farm, which if you don’t know is a property owned by the Sisters of Saint Ann which provides many community programs. Dad’s project was to get the old fields productive again and much of the work was funded out of his own pocket. To recognize his effort and success, the farm dedicated one of the buildings in his name.

Mom and Dad were also heavily involved in the Catholic Church, being longtime members of the Knights of Columbus and the CWL respectively. Over their marriage, they traveled to many faraway places like India, Africa, and Peru; in 30 years, they made 25 out-of-country trips

Mom passed in 2003, after being married to Dad for almost 54 years. One of the family’s greatest concerns was that Dad would starve; there was no evidence up to this point that he could work even a microwave.   He did manage to survive and even turned into a passable cook.

He was however a terrible driver.  He would fly up behind someone in the fast lane on the Malahat and tail gate them until they submitted.  After a few white knuckle experiences we all decided to just meet him where we were going.

Dad decided to visit the Gold Coast in Australia, and while he was there, he looked up an old friend of his and Marie’s named Sandra. The next thing you know we had a new member in the family. Despite her small stature, Sandra has managed to keep Dad in line for the past 12 years.

Ken and Sandra traveled the world quite regularly, but spent most of their time either on the island or in Australia.  Until the last few days when he was in the hospice they had only been apart one other time in their over 12 years of marriage.  They had very similar interests and kept each other challenged thoughout their time together.  We would like to thank Sandra for putting up with him all these years – especially in the last few months taking such good care of him at home, being that he was never sick and used to doing what he wanted, he wasn’t always the easiest patient.

Up until this spring he planted a large garden that fed most of the neighbourhood.  When Dad was 79, he thought it would be a good idea to plant a vineyard on an empty lot he owned below his house. Upon hearing this news one of his neighbours asked how long it took for a vineyard to come to fruition. My father answered, “7 years.” His friend replied, “Well, you’re being a little optimistic aren’t you?” I don’t think that Dad ever thought that he wouldn’t see his vineyard in 7 years.  Now if the question was how long does it take a vineyard to produce a fine vintage…..well that’s a different story.

Last year he decided that slugging around a 50 pound backpack sprayer 4 times a year in the vineyard was getting to be too much and he tore out most of the vines and hand planted 1000 lavender plants.  Sadly he never got to see the first crop.

Dad hoped he would be remembered as having made a difference.  When I think of the impact he made on the truss industry, his family and this community, I think we can all agree he has made a huge difference in the lives of many.

In the words of novelist Bryant McGill “It is better to have a meaningful life and make a difference than to merely have a long one”; this must mean Dad is a doubly blessed man as he achieved both in his lifetime.